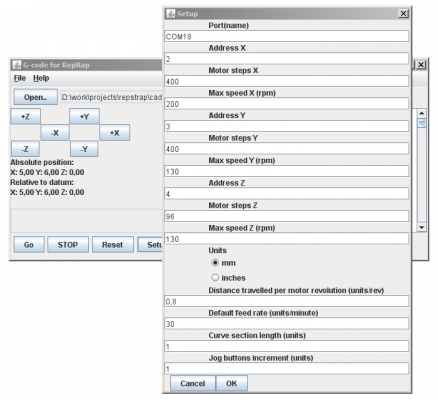 The RepRap project is a very exciting development in open-source hardware. It’s a machine for which the eventual aim is to have it make copies of itself, which is of course quite a tall order. It is a sort of computer-controlled robot which squirts out hot plastic in a controlled way, building it up in layers to make a solid object. When I read about this project I became very interested in its possibilities, particularly for artistic purposes. In theory it should be able to make almost any shape which can be imagined. The possibilities are endless!

As a stepping stone to building a full version of the RepStrap (the name given for a machine not built from self-generated parts, but designed to make the first generation of parts), I have built a 3-axis Cartesian robot from typewriter and inkjet printer parts, with the idea that I could attach a small drill to it in the meantime and use it to mill shapes from wood, plastic, maybe even aluminium. Building the thermoplastic extruder needed to start building things using additive manufacture looks like being a lot of work (and more importantly time), and so the subtractive (milling) option seemed a bit less daunting. More about my machine here.

The RepRap firmware has the ability to read G-code files, the standard format for controlling CNC machine tools. What my program does is provide a graphical user interface for this, allow the user to load a G-code program and run, stop, and pause this, as well as manually enter G-code. Additionally, there are jog buttons to allow manual positioning of the tool head before starting a program.
Suggested CAD software for producing .DXF files;

I will try to add some more here when I get a chance to investigate some more. Suggestions most welcome!

Some utilities to convert .DXF to .NC (G-code) files, as needed by G-code for RepRap;

Another use for this machine may be milling PCB”s. I have found at least one piece of software which is free and can produce G-code from Eagle files as well as Gerber files. I have not yet tried it out with G-code for RepRap.

This software is GPL licensed (which means it’s free in all senses of the word).

A video of it in action can be seen at my three-axis CNC robot page.